This app was released by NXP Software a few days ago, and has generated quite a splash. Not only does it enable you to watch DivX and Xvid movies on your iPad without converting them first, but the app is free!

Here’s a video of CineXPlayer in action, showing the basic functionality: 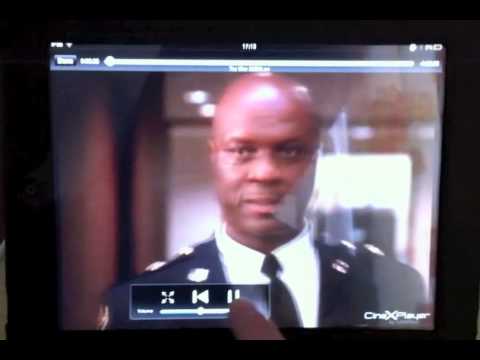 If you quite the app mid-way through watching a movie, it’ll resume where you left off when you open the app again.

Seeing as this is doing in software what Apple does in hardware with .mp4 files, the player works very well. Decoding in software does mean a slightly higher battery hit though – for an hour’s viewing, my battery indicator dropped from 100% to 86%. Mind you, Apple rates the iPad for 10 hours of video playback (using their own hardware decoding), so that’s not bad.

I’m not sure of the exact specifications of the video that this app currently supports – there’s no mention of maximum resolution or filesize. The developers have made it clear that they don’t support newer file formats such as MKV or AAC – yet.

What about the 2Gb limit?

On the iPhone, apps are limited to a 2Gb sandbox – so for any app, you can’t use more than 2Gb of data. But with the iPad, the sandbox is only limited by the amount of storage on the device.

What does this technical gubbins mean? It means you can put as many movies into CineXPlayer as you have space on your iPad, making it a viable alternative to Apple’s built-in Videos app.

I’m quite surprised that Apple has allowed this on the App Store. But if they let it remain, what could we see?

I’d also love to see the app become network-capable, removing the need to transfer files via iTunes. But that would kill the battery, I’ll bet.

All in all, this is a great app, which removes the hassle of having to convert video specifically for the iPad. Grab it now, just in case it disappears from the App Store!