Having a set of minions to dominate and control has been a staple in gameplay since kids first got pets, dolls and younger siblings to knock around. Indeed, the Sims has become probably the most lucrative video game in the world by expanding on this simple premise until it burst.

The iPhone is an excellent platform for this type of game. It provides the user with a touch screen to manipulate their subjects in a pocketable device that allows users to indulge in a spot of torture whenever they have a few minutes to spare.

Pocket God from Bolt Creative gives you a couple of tropical islands to paddle around in and half a dozen or so villagers to torment with your godly powers. It’s just a shame the developers forget to include a rather vital component. The first thing to strike you about Pocket God are the graphics. These are beautifully realised in a lush, cartoon style that will particularly appeal to kids but also lends it an air of quality and promises much. The scene you’re presented with is a tropical island complete with sloshing sea and beating Sun. On-screen controls are limited to a ‘+’ button used to populate your paradise and an arrow. Pressing this opens up a bar across the top of the screen to turn various options on and off though you’ll have to investigate the help screen to translate the meaning of many of these icons.

Mostly though, the only control you’ll need is your index finger. Deploying this in various ways conjures up a number of functions. For example, one method of manipulating your characters is to drag an unfortunate victim up above the clouds and release, sending him crashing to earth. An upward flick lobs unsuspecting victims far across the ocean to drown a cartoon death.

Dragging the Sun down to the horizon changes day to night rather pleasingly while shifting the moon in a similar way reverses the process. Clouds can be moved along and coconuts separated from their tree. There are a number of other things to do but I’ll leave you to discover these for yourself. So, now that the location is established, the population’s conjured into existence and your powers have been explored, what is it that you actually do in Pocket God?

You’ve done it all. The developers have crafted this lovely little world, taken great advantage of the iPhone’s touch interface AND FORGOT TO ADD A GAME!

It’s like finding a Ferrari on your drive, all gorgeous and shiny but discovering it has no engine. Though some will be content to polish it or sit inside making ‘brrrrmmm brrmm’ sounds, most will find it pointless.

The only element that remotely resembles a game is flinging your victims into the distant volcano on the second island. Each bullseye prompts a reaction leading to a not entirely surprising result. But that’s it as far as gaming goes.

New versions are released regularly (the developer aims for weekly updates), with one or two additions each time. The ‘episode’ I tried, named “The Tyrannosaurus Strikes Back!” adds a dinosaur egg to the mix, allowing you to throw it around causing the infant inside to pop out and call its parent. When Mum shows up she stamps around chomping down on any villagers within range. Future ‘episodes’ promise such features as a tsunami, huts and different types of Islanders. But still no game. Verdict
I really want to like Pocket God. It’s got so much going for it – a lovely graphic style, slick, professional coding. But…

The trouble is, it’s a vacuous experience. There’s stuff to do but not anywhere near enough to keep you occupied and no reason to do it twice. You’re not able to improve with practice as, apart from the volcano tossing, there’s no skill or tactics required. In fact, watching the video of the game in action (below) is as good an experience as ‘playing’ it yourself… and cheaper.

What makes it particularly frustrating is that it really wouldn’t take much to turn this into a cracking little game. It already has the visuals and most of the mechanics required. If they ever get around to tucking a game in there under the hood, I’ll be first in line to give it a try.

Pocket God is very popular on the App Store, garnering a high average review score from hundreds of users. I have to admit, as visually appealing as it is, I fail to understand this reaction. Clearly, I just don’t get it. As it stands, Pocket God may look good and entertain for a few minutes (possibly longer for kids) and you’ll no doubt want to check new functions whenever an update comes out but ultimately, it’s an empty and short lived experience.

Note: As I was finishing this review, the next update “Return of the Pygmy” arrived. This contains the first feint glimmer of a shred of an actual game as it promises a new stat screen that lists your achievements as a god. So, if you choose to put your mind to it, you can elect to ‘play’ Pocket God by trying to collect all the achievements. Unfortunately, as the developer points out on the information screen in the App Store, the new god stats screen isn’t working. Oh well, at least it’s a start. 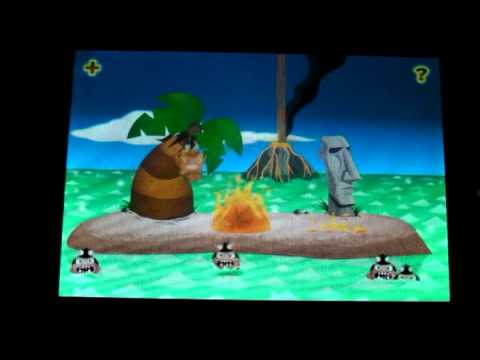