Even the most hard nosed business type appreciates a good iPhone game to help while away a spare five minutes. Car journeys, plane trips and even tedious meetings can all be made more bearable with the right type of entertainment. iEscape is a puzzler from developer Yves Bresson that, while impressive in most ways, has a couple of small niggles that takes the edge off the fun.

Flashy menus
Firing up iEscape is a reassuring experience. There’s something about it that oozes solid coding. The menus are very slick and even a normally dull Title screen is given a little life with the addition of the games central stickman character gently wafting around in the background. Pressing ‘Scores’ or ’About’ causes the screen to smoothly fold back like a page, adding to the glossiness of the experience.

The ‘About’ screen takes you through the simple rules of the game while ‘Scores’ displays the current high score table giving you the option to toggle between local and (assuming you’re online) worldwide results. There’s only one option available (via the iPhone Settings app) and that’s ‘Auto-submit scores’. Gameplay
Pressing ‘Start’ flips the screen over, presenting you with the actual game field. To the left is the level number (out of 50), your score, lives and time remaining. The actual game consists of moving the stickman character around a simple maze to the exit. Obviously, things aren’t quite that easy with the challenge starting to appear on level 2 when the path to the exit is blocked.

To overcome this, stickman is able to push walls back but only if no other wall is directly behind. This simple premise quickly leads to much head scratching and it’s not long before you encounter a level where time runs out while you’re mulling over the best strategy. A little planning is also recomended as it’s all too possible to get yourself stuck. This isn’t a bug, I hasten to add, but part of the gameplay. There are a few things that, although not bugs or major problems, did spoil my enjoyment. To move stickman around requires a swipe in the direction you want him to go. The first minor niggle is that the graphic for the stickman character jumps from one tile on the playing area to the next. No animated walk to the new spot or even the static graphic smoothly sliding from one tile to another. No, it pops from one spot to the next. This is noteworthy because of how crude it seems after all the glossy folding menu graphics the programmer treated us to moments before. It’s at such odds with the rest of the presentation that I found it a little jarring but I freely admit this may just bother me and not even be noticed by most others. The second point is the swipe gesture used to move the character around works fine but gets tiresome after just a few levels. Being able to simply tap on the spot you’d like stickman to go would be preferable.

Save me
The biggest problem though is the fact that you cannot save your game. The natural assumption is that if you quit the game (with lives still remaining) and return later, you’ll be returned to the same point as when you stopped. Nope. You have to start again from level 1.

My assumption is that this was a deliberate decision to stop users completing the game too quickly and there’s certainly some logic to it. But, in practice, it’s a real pain and discourages playing when you only have a few minutes to spare. It also tests the patience to have to get through the same levels for the umpteenth time. A level editor is promised for a future update and I hope this encourages the developer to include the automatic save option. My guess is that it would mean the game naturally lasts longer without artificial measures. Conclusion
Although I found a couple of things that bothered me, if you can look past them, the game itself is a nice puzzler and will appeal to those who appreciate a little gentle mental exercise.

Fortunately, the developer is one of those enlightened souls who had the foresight to create a free version for users to try before parting with their cash. ‘iEscape LITE’ is limited to 10 levels but this is certainly enough to give users a chance to find out whether it will suit them. 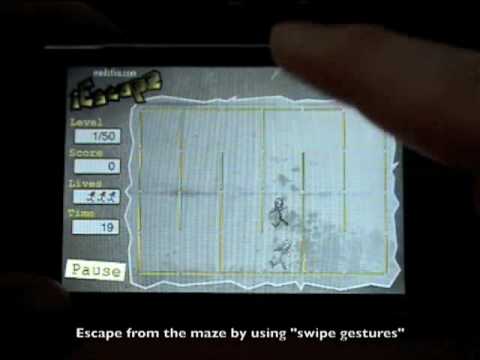 Previous Entry: Nothing’s worse than a really bad day
Next Entry: Welcome to the new All About iPhone