I get an awful lot of requests for reviews on All About iPhone, and I can only get to a fraction of them. So, I’ve begun offering them (and you) the option of the “Three Word Wrap”. It goes like this:

Readers get: Free apps! (in return for a three word review)

So read on for the first offering of free apps…

END_OF_DOCUMENT_TOKEN_TO_BE_REPLACED

Your iPhone + a toddler. Together, these are not necessarily a good combination. But, if you can get over handing your precious iPhone or iPod to a child, then it can keep them entertained for a while, and hopefully educate them a little as well.

iColorQ is a good example of this in action.

END_OF_DOCUMENT_TOKEN_TO_BE_REPLACED

Having a set of minions to dominate and control has been a staple in gameplay since kids first got pets, dolls and younger siblings to knock around. Indeed, the Sims has become probably the most lucrative video game in the world by expanding on this simple premise until it burst.

The iPhone is an excellent platform for this type of game. It provides the user with a touch screen to manipulate their subjects in a pocketable device that allows users to indulge in a spot of torture whenever they have a few minutes to spare.

Pocket God from Bolt Creative gives you a couple of tropical islands to paddle around in and half a dozen or so villagers to torment with your godly powers. It’s just a shame the developers forget to include a rather vital component.
END_OF_DOCUMENT_TOKEN_TO_BE_REPLACED

Some apps seem ripe for the iPhone: games, Twitter clients, podcast players and many others. Who though, would think to create an application that contains several of the essential photo manipulation tools found in more grown up software like Photoshop? GhostBird would… and did.

With PhotoForge, you effectively get two apps in one. It’s an image manipulation utility and also a painting app. Although I suspect the developers see the image manipulation side as the main selling point, for me, it’s the painting aspect that’s of most interest. I’m not suggesting its bad at twiddling with your photos, it’s actually very good at it and includes an impressive range of tools. It’s just, for me, it suffers from an inherent problem regarding photo editing on the iPhone. But I’ll come to that later.
END_OF_DOCUMENT_TOKEN_TO_BE_REPLACED 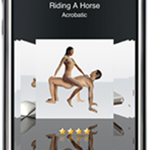 Will this adult app be seen on the App Store?

Since the App Store opened on July 10th 2008, Apple has earned plenty of justified criticism over its approval policies. There’s still a lack of transparency over what may or may not be allowed. But Apple has always been clear in its role as the gatekeeper that it will not allow “adult” applications.

But I’ve just received an email from a developer letting me know about his adult iPhone app, which will be approved after iPhone OS 3.0 is released. Is Apple about to relax its grip on the App Store?

END_OF_DOCUMENT_TOKEN_TO_BE_REPLACED

The cheapest way to get an iPhone on O2 UK

If you’re thinking about buying an iPhone on O2, there is a page on Martin Lewis’ MoneySavingExpert site that looks at the monthly tariffs. But it’s well out-of-date now, so I’ve put together a quick guide highlighting the total cost of ownership.

Read on for the cheapest way to get your hands on Apple’s shiny mobile, short of nicking it!

END_OF_DOCUMENT_TOKEN_TO_BE_REPLACED

It’s time for a round-up of info I’ve gleaned from recent posts on Twitter. O2 have an official presence on Twitter, and recently asked for suggestions for iPhone apps. Giving away some apps specific to their network would be a good move for the carrier – they could add some real value to the iPhone customer experience.

Some of the most requested included:

END_OF_DOCUMENT_TOKEN_TO_BE_REPLACED

You, like me, probably pay a lot of money each month for your iPhone. You, like me, expect your iPhone to be blessed with the fact that Apple products “just work” (generally). You, like me, do not expect calls to randomly go straight to voicemail without even ringing.

For a phone, especially an expensive phone, this is very bad indeed.

END_OF_DOCUMENT_TOKEN_TO_BE_REPLACED

Carnival of the Mobilists #172

The latest Carnival is now available at mobilestance.com. Do I need to say that there is some excellent reading? Take that as a given for the Carnival.

A couple of iPhone-related highlights though:

So the devkits have been explored, the interviews taken and the rumours integrated. It’s now a dead cert that video recording will hit the iPhone for its big 3.0 June re-launch. And that a basic ‘iMovie’ application will be there for splicing clips together.

“Big deal”, owners of other smartphones might think, “my phone has had high-resolution video recording for years”. And they’re right, I used a Nokia N93 to record my summer holiday in 2006 in full VGA resolution with stereo sound. It was sunny and it was glorious.

But Apple are set to go one better and by doing what they do best – making things easy for users while staying away from the bleeding edge. END_OF_DOCUMENT_TOKEN_TO_BE_REPLACED